Wounded by comments around her failure to cook me breakfast, Gen’s generous response was to take me to a very nice ‘I saw you coming’ cafe in Clifton for ‘smashed avocado’, sourdough and other staples of a Clifton diet.  It was good but, er, guess who paid!? 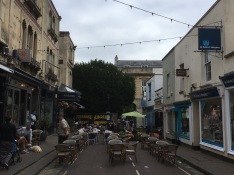 We then continued at a leisurely pace onto Brunel’s suspension bridge over the Avon gorge – pretty scary for me and unsure what Morph was doing there – and into Ashton Court park. 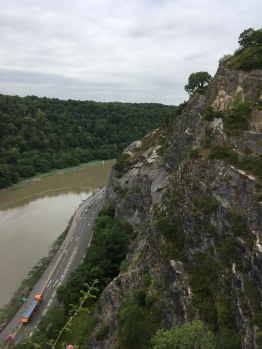 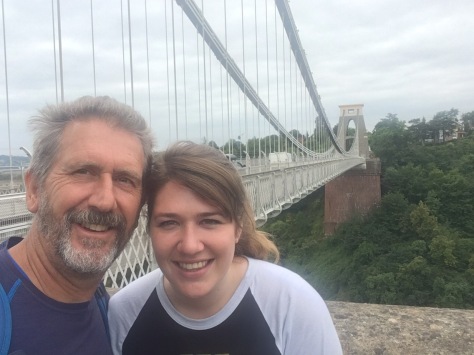 After the park we followed paths across the A390, the A38, the Bristol-Exeter train line, and under the flight path to Bristol airport, a bit frustrated by footpath diversions, poor signage and overgrown vegetation. Spot the footpath sign in the photo below…. 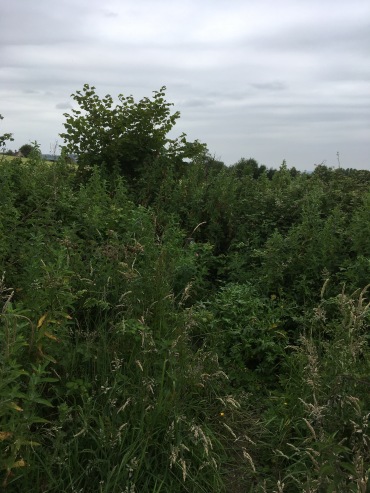 After a while, views of the suspension bridge, the Bristol skyline, and the Severn estuary fell away and we had the Chew valley laid out in front of us, with its various lakes and reservoirs feeding Bristol with its water.

It was about this time – lunchtime-ish – and about three hours from Blagdon, that Gen announced that in fact the last bus back into Bristol that she’d need to catch left in just two hours …. This triggered a military-style yomp at top speed through the valley and over the Blagdon lake dam (though Gen still seemed to think she had time to stop and smell the roses!). Also, lots more Himalayan Balsam and now in flower.

Well, we made it, with no time to spare and a kindly bus driver to thank. Gen collapsed into her bus seat and I collapsed into the Seymour Arms for a gallon of orange juice and soda, before a gentle stroll to my pub accommodation in the neighbouring village of Rickford.

Dave B is joining me here for the next few days of walking across the Mendips, Quantocks and Exmoor.  The cows have been lying down so maybe Dave’s predictions of rain are right. Now, where are those waterproofs?  Unbelievably I haven’t had them out since Lancashire !